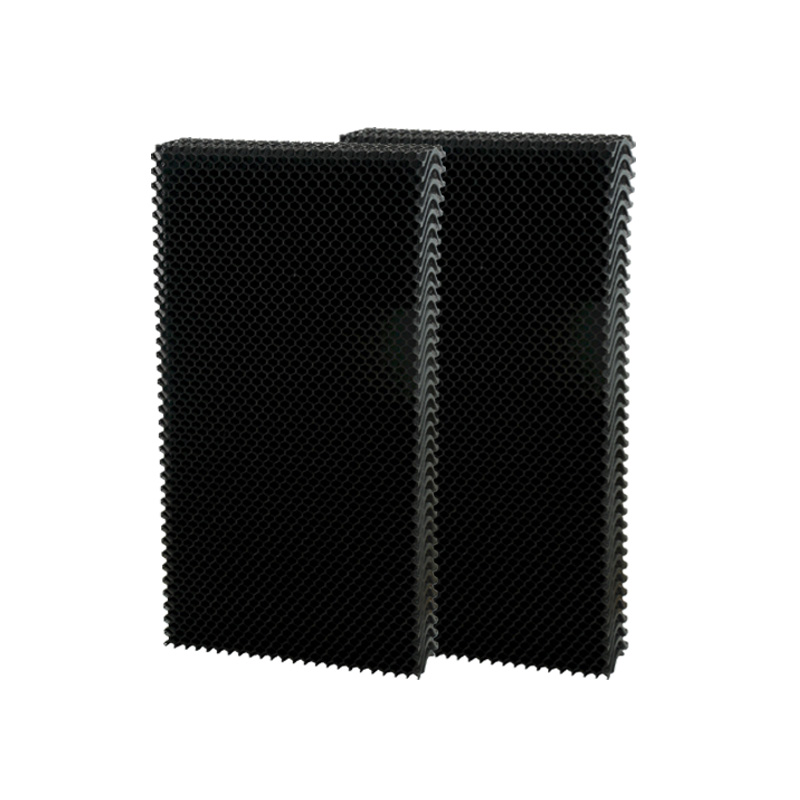 1、The plastic evaporative cooling pads are honeycomb structure and is produced by injection molding of the original plastic, and the evaporative cooling efficiency is more than 85%;
2、The traditional paper cooling pad is not easy to clean, easy to deform,the plastic type could high pressure cleaning, no shrinkage, no deformation, long service life;It can use more than 10 years. Compared with paper cooling pad, no need to exchange the cooling pad so often, and save a lot of time and manpower.
3、High water resistance, mildew resistance, anti-collapse, anti-bird pecking.
4、This material is resistance to corrosion, so can use disinfectant in water.
5、 Easy cleaning. The paper cooling pad cannot clear easily, but we can use water gun to clean the plastic cooling pad, thus keep clean and good ventilation.
6、 There is no allergic things on plastic cooling pad, and very good to environment.
7、Fast diffusion, long-lasting performance, no substances harmful to human body, green, environmental friendly and economical;
8、Sizes can be customized.


Send email to us 1. Long service life.Traditional paper curtain: three to four years;Wet plastic curtain: seven to eight years.
2. The surface can be cleaned at any time when there is dust accumulation (high-pressure water gun can be used for cleaning), and the cooling effect of dust collection will not decrease year by year.
3. Air humidity is about 15% lower than traditional paper curtain.
4. No smell, fundamentally eliminate the traditional cooling pad taste, harmless to the human body.
5. Uniform color, no size error, flat appearance.
6. Waterproof flow splash, prevent birds from pecking and mice from biting, acid and alkali resistance, corrosion resistance, temperature resistance of 100℃.
7 will not shrink deformation, fundamentally put an end to the ordinary cooling pad autumn water after varying degrees of narrow light transmission problem

What is the difference between plastic cooling pad and paper cooling pad?

In the construction process of modern piggery, most farms choose negative pressure ventilation system for ventilation of pig farm, plastic cooling pad and paper cooling pad well matches the negative pressure ventilation system, let's talk about their functions and differences.
Paper cooling pad: paper cooling pad is installed on the wall of the piggery air inlet , with water circulation system, water flow through the water curtain infinitely, when the outside air enters, the air through the cooling pad and exchange heat with the water, temperature will rapidly drop,which has a significant effect on cooling the pig farm.
Plastic cooling pad: plastic cooling pad is also called deodorant cooling pad. Pig urine and pig dung smell produced by piggery will have many harmful gases. Direct discharge will not only pollute the environment, but also have epidemic prevention risk. Deodorant cooling pad installed in the air outlet, through the spray, such as water-soluble harmful gases like ammonia, will be dissolved in water to avoid being directly discharged to the outside. At the same time, the special material of plastic cooling pad can effectively filter all kinds of impurities. Generally speaking, the deodorization efficiency of two-layer deodorization wall can reach 75%, and that of three-layer deodorization wall can reach more than 85%.